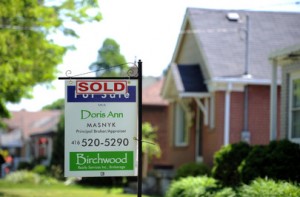 The Greater Toronto Area saw almost 20,000 homes surge on the market in May, a welcome relief to an overheating real estate market. The supply didn’t cool home prices, however.

After three years of house hunting, three lost bidding wars and hundreds of hours trying to figure out a market that defies logic, Melissa Hart and her husband called off their search for a Toronto home this week.

“We have our down payment in the bank and we’re just going to keep renting,” says Hart, 30. “I’ve had lots of realtors email me to say that the bidding wars are gone and it’s a good time to buy, but we’re not seeing that at all. It’s just too insane out there right now for us.”

Demand remains so unusually strong for the number of homes listed for sale across the GTA that the region is on pace to match or even beat the previous sales record of 93,193 homes. That was set in 2007 before the recession sent the market into a brief downturn followed by a rocket-fast recovery that continues to push prices skyward.

More than 19,000 new properties came up for sale across the GTA in May — a welcome 20 per cent increase over a year ago. But the region continues to be plagued by a serious shortage of listings.

Unrelenting demand — driven largely by low interest rates — coupled with the shortage of homes for sale across the GTA helped push the average price of a resale home to $516,787 last month, a 6.5 per cent increase over May of 2011, according the figures released Tuesday by the Toronto Real Estate Board.

If the spike in new listings continues, the number of homes listed for sale this year could total 160,000 across the GTA, says Jason Mercer, senior analyst for the Toronto Real Estate Board.

But that’s still significantly short of the 180,000 homes needed to adequately meet current demand and return what’s been almost exclusively a sellers’ market since 2005 back to more balanced conditions, says Mercer.

FREE: Relocate Assistant at your service

Realtors say they’ve been seeing some common sense return to a market that’s been unusually hot since last fall, with fewer — or at least less frantic — bidding wars, especially in coveted 416 neighbourhoods.

But that’s not what Hart is seeing, or hearing, via the many emails she receives each week from would-be buyers on her blog FML Listings that provides frank, and funny, assessments of “Ridiculous Toronto Real Estate.”

“I had one woman email who says she cries every time she goes to an open house. She’s pregnant and just wants a place to live and she knows she’s not going to get one,” because she gets priced out in bidding wars.

“I used to think this would end, but I’m feeling now that this is permanent. That we may see prices level off but we’re never going to see them go back to (average sales prices of) $400,000.”

Every day at 5 p.m. Hart gets lists of properties sold that day across the GTA — and virtually all of them are still selling within three days for over asking, says Hart.

“I get a lot of emails these days asking me, ‘Do you think there is going to be a crash or not?’” she says with a laugh. “I tell them, ‘I don’t know. Nobody really does.’”

-moneyville
Ilan Joseph is a Real Estate Broker with Sutton Group and is co-founder of a 10-person award-winning team Toronto real estate team. You can find him on Twitter and Google+. Over the past 10 years, Ilan has provided more than 1300 buyers and sellers valued advice and service to enable them to reach their real estate goals. He’s kind of like the Bruce Willis of real estate.