When the Promenade Mall opened its doors on August 4, 1986, the retail world was in full bloom and the internet had yet to transform the way we live, work and shop. Thornhill-Vaughan was a far quieter suburb than what its transformed into today and the almost wild surge in demand for the neighbourhood is virtually impossible to measure. Every facet of life around the Promenade Mall has changed in these 32 years and the new Promenade Mall redevelopment plan from Liberty Developments, who purchased the Promenade Mall in 2017, is a reflection of this massive change. Phase 1 of this plan is called Promenade Park Towers, bringing condos to the southern portion of the Promenade Mall. 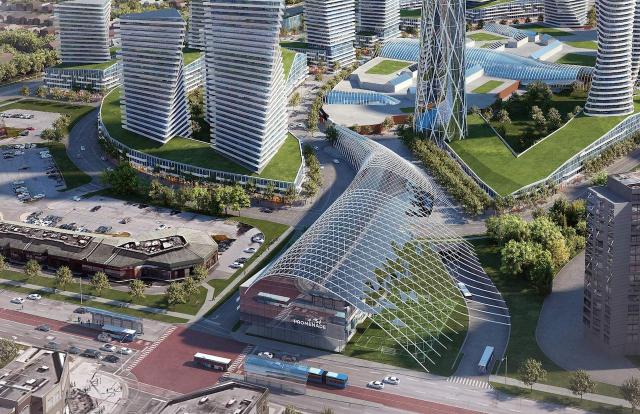 Coming at the heels of the retail giant, Sear’s, recently departure from the mall due to bankruptcy, the new proposal looks to not only fill the massive vacancy Sears created, but to also tackle the steadily declining traffic to the shopping centre.

Promenade Mall Redevelopment plans by Liberty Development are calling for a multi-phase expansion, starting with ‘Promenade Park Towers‘ which will see some of the shopping centre stay but its southern and eastern portions redeveloped together, together with the large swaths of land surrounding the mall and currently being used for parking. The plan calls for three residential towers with heights of 28, 30 and 35 storeys, alongside a 28-storey mixed use building which will feature state-of-the-art offices and a landmark hotel, together creating 144,613 square metres of gross floor area. 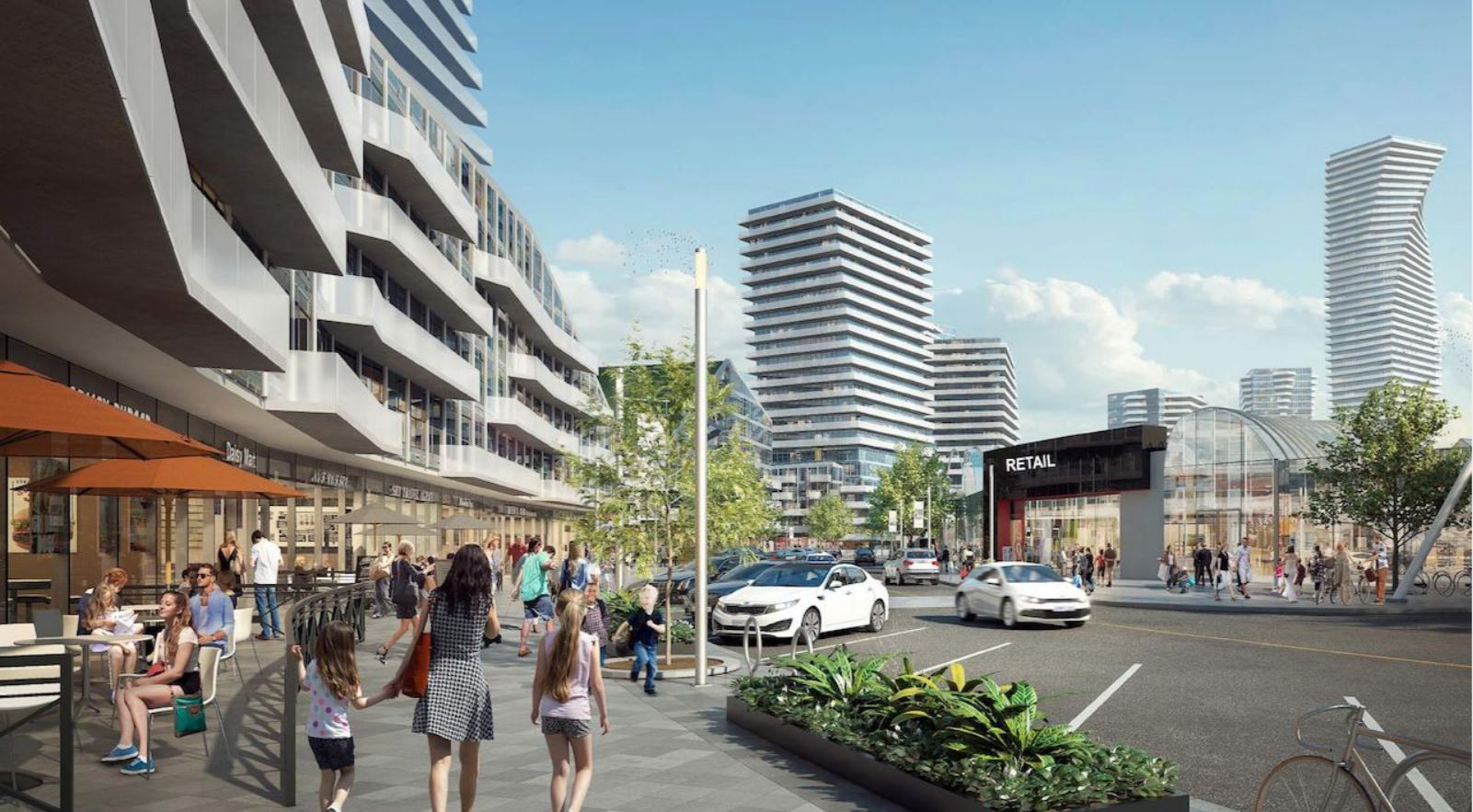 The 3 residential towers (A,B, D) will feature 1,066 units in total with the first two towers (A, B) sitting atop the current sears site and sharing a 6 storey podium connecting the two will be separated by 32 metres. These first two towers will contain 748 units, including 363 one-bedroom units, 337 two-bedroom units, and 48 three-bedroom units. To the north of the existing mall entrance, the third residential tower (D) is proposed to rise 28 storeys and contain 318 residential units, including 265 one-bedroom units and 53 two-bedroom units. The combined hotel and office building (C), will house 24,392 square metres of office space up to the 14th floor while floor 15 through floor 28 will feature 15,203 square metres of hotel space, spread across 156 suites.

Liberty Developments doesn’t only want to build towers and shopping space at the Promenade Mall Condos, they also plan to incorporate significant public land improvements, including an outdoor amphitheatre on the west end of the mall, a grand pedestrian gateway on the east towards bathurst street and a pedestrianized north-south High Street fronted by commercial uses. The focus will be on increased connectivity, new pedestrian spaces, improved linkages to surrounding neighbourhoods and open spaces. Promenade Park Condos Phase 1 is dashed in red below. 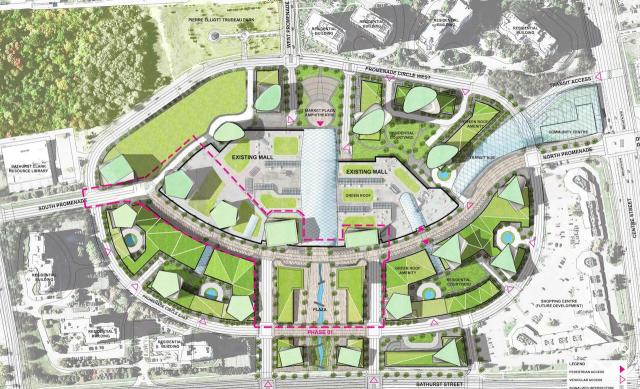 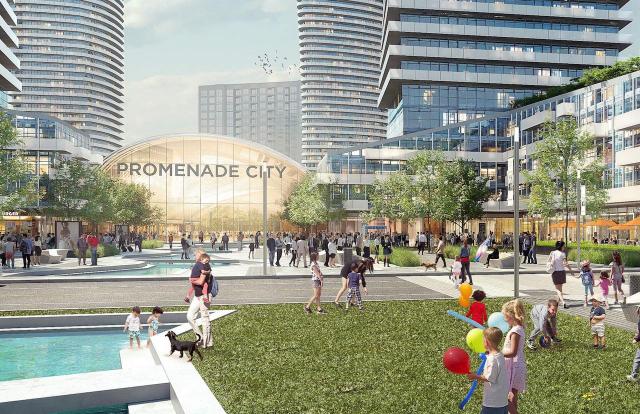 An 8.1 kilometre ‘Dedicated Rapidway’ (the
Rapidway’) is scheduled to open in City of
Vaughan in December 2019, with service provided
along Centre Street, Bathurst Street and Highway
7, as well as connections to Richmond Hill Centre
Terminal (Yonge Street) and the TTC Vaughan
Metropolitan Centre Subway Station (Highway 7
and Jane Street). The Rapidway will include a new
Disera-Promenade Viva Station stop, which is collocated
on the Site with the Promenade Terminal. The Rapidway is intended to
provide safer left turns for drivers, with dedicated
left-turn signals at intersections and the ability
to make protected U-turns.

Metrolinx is currently working in partnership with
City of Toronto, TTC, YRT and the York Region Rapid
Transit Corporation to conduct detailed planning,
design and engineering work on the Yonge North
Subway Extension which will involve the eastern
segment of TTC Subway Line 1 (Yonge-University)
extending 7.4 kilometres north from TTC Finch
Subway Station to Richmond Hill Centre Terminal.
Five new subway stations will be added as part of
the extension, including Clark Station located at
Yonge Street and Clark Avenue, approximately 2
kilometres east of the Site.