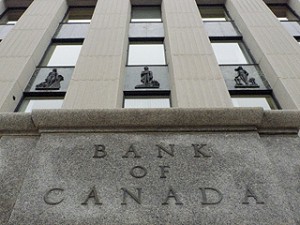 Ottawa, Ontario – The Bank of Canada announced that it is maintaining its target for the overnight rate at 1 per cent. The Bank Rate is correspondingly 1 1/4 per cent and the deposit rate is 3/4 per cent.

The global economy has unfolded broadly as the Bank projected in its July Monetary Policy Report (MPR). The economic expansion in the United States is progressing at a gradual pace. Europe is in recession and recent indicators point to a continued contraction. In China and other major emerging economies, growth has slowed somewhat more than expected, though there are signs of stabilization around current growth rates. Notwithstanding the slowdown in global economic activity, prices for oil and other commodities produced in Canada have, on average, increased in recent months.  Global financial conditions have improved, supported by aggressive policy actions of major central banks, but sentiment remains fragile.

In Canada, while global headwinds continue to restrain economic activity, domestic factors are supporting a moderate expansion. Following the recent period of below-potential growth, the economy is expected to pick up and return to full capacity by the end of 2013. The Bank continues to project that the expansion will be driven mainly by growth in consumption and business investment, reflecting very stimulative domestic financial conditions. Housing activity is expected to decline from historically high levels, while the household debt burden is expected to rise further before stabilizing by the end of the projection horizon. Canadian exports are projected to pick up gradually but remain below their pre-recession peak until the first half of 2014, reflecting weak foreign demand and ongoing competitiveness challenges.  These challenges include the persistent strength of the Canadian dollar, which is being influenced by safe haven flows and spillovers from global monetary policy.

Core inflation has been lower than expected in recent months, reflecting somewhat softer prices across a wide range of goods and services.  Core inflation is expected to increase gradually over coming quarters, reaching 2 per cent by the middle of 2013 as the economy gradually absorbs the current small degree of slack, the growth of labour compensation remains moderate and inflation expectations stay well-anchored. Total CPI inflation has fallen noticeably below the 2 per cent target, as expected, and is projected to return to target by the end of 2013, somewhat later than previously anticipated.

Reflecting all of these factors, the Bank has decided to maintain the target for the overnight rate at 1 per cent. Over time, some modest withdrawal of monetary policy stimulus will likely be required, consistent with achieving the 2 per cent inflation target.  The timing and degree of any such withdrawal will be weighed carefully against global and domestic developments, including the evolution of imbalances in the household sector.

If you have any questions about the home-buying process or if you have a general real estate related question, please don’t hesitate to contact me.