Weed Legalization in Ontario & Real Estate: What You Need to Know 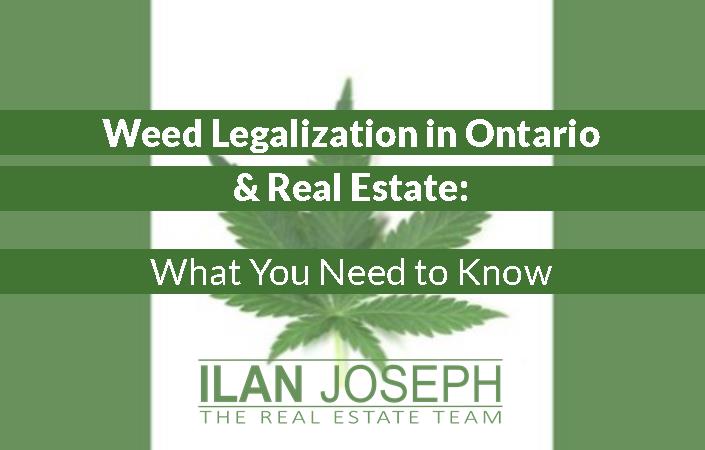 Cannabis Legalization is coming to Canada and this is what you should know about how it will affect real estate in Ontario.

With weed legalization recently coming into effect in Canada, many Ontario homeowners and real estate enthusiasts are wondering about the new laws and how it relates to them, especially if they are interested in growing and/or consuming recreational marijuana in their homes.

As of October 17, 2018, Canadians are able to grow up to 4 marijuana plants in their private residence. However, you need to be aware of the regulations and laws if you want to avoid a fine or avoid losing your mortgage entirely.

According to Bill C-45 (the Cannabis Act) Canadians are now allowed to smoke, vape, or consume marijuana in their homes, and they may also grow up to 4 plants in their house. However, the way in which the legalized marijuana is distributed will vary from province to province across the country.

Multiple condo dwellers have expressed concern about the legality of smoking weed in condos, especially when in such close proximity to other condo owners, many of whom may be young professionals or young families with small and impressionable children. The issue of smells is also a common concern among condo owners, many of whom are sick of smelling weed being smoked from nearby properties.

However, the bigger issue comes with houses where people are now increasingly growing indoor stashes of marijuana for personal use. As more and more homeowners look to grow weed in their homes, it becomes trickier and trickier for multiple stakeholders in the real estate market to do business, affecting real estate agents, home inspectors, and home buyers/sellers in equal measure.

First things first, the legal definition of a “grow-op” (i.e. a home where weed is grown) is not very clear on just how much weed it refers to. As a result, homes could potentially be stigmatized for growing just one plant or for growing dozens.

There are also structural concerns with homegrown weed. For example, to grow a cannabis plant in the correct conditions, certain alterations to a home’s heat, humidity, and light need to be made. As a result, the power and humidity levels necessary to grow a large plant can lead to faulty electrics and moldy houses down the road. Houses with overworked electrics and mold growth are understandably not very appealing to real estate stakeholders.

Homes which have been designated “grow-op” homes are also being turned into real estate pariahs by numerous companies who want nothing to do with them for the fear of tarnishing their own reputations or running risks. For example, mortgage lenders don’t want to get involved with a home which has been used to grow marijuana, whereas home insurance providers are reluctant to give out policies (or at least wish to amend policies) for homes that have been used to grow weed, considering them to be high-risk homes. This means that these homes may have large gaps in their insurance coverage (or no insurance coverage at all) and may find it hard to be sold or bought in the future.

What this means for insurers and lenders

Of course, this is all fairly new at the moment, and attitudes are likely to become laxer with time. Nonetheless, the hesitant attitude of insurers and mortgage lenders may make some citizens think twice about their desires to grow marijuana in their homes, with the vast majority of class “A” banks deciding to straight-up refuse mortgages for homes with evidence of cannabis growth.

As Mike Bricknell, a mortgage broker with CanWise Financial, puts it:

“So far, any trace of a ‘grow op’, legal or not legal, past or present, is not to be considered approvable by a conventional residential lender.  For the unconventional lenders it takes a lot of paperwork, air and mould testing, and case-by-case exceptions to obtain a mortgage and home insurance approval.”

The issues become even more complicated when it comes to things such as fire safety. This is because many insurers will not provide fire insurance coverage to homes where weed growth has been present, and this presents a too-high risk for banks. Technically speaking, a bank or mortgage lender owns a property until a homeowner has paid it off in full, and it doesn’t make sense for them to gamble with uninsured (or partially uninsured) assets in such a way.

As the legalization of cannabis becomes more settled in and various institutions adjust to the idea, it is likely that some insurers are going to see the opportunity to make money but filling this gap in the market, and some banks may even follow suit too.

What this means for realtors and sellers

According to the survey held by Zoocasa, however, 47% of budding home buyers said that they would be less likely to purchase a home if weed has been grown there in the past. Furthermore, 39% of the respondents felt that homes which had been commonly used to grow/smoke marijuana in the past would lose much of their value.

The problem also extends to realtors, who may be required to disclose that homes have been used to grow marijuana in the past, in the same way that they should disclose whether or not a murder occurred in a home, for instance. However, the federal legislation regarding this is not too clear. Pierre Leduc, a spokesperson for the Canadian Real Estate Association, stated:

Pierre went on to clarify that real estate regulations vary from province to province, meaning that the rules regarding disclosure could become different in Ontario than they are in say Alberta. As a result, it will be up to the different provinces to create/modify legislation regarding the disclosure of grow-op homes on the real estate market. Of course, most realtors will prefer to avoid disclosing such information which could be off-putting for more conservative buyers, although they will be forced to follow the rules which their provinces enforce down the line.

Earlier this year, in an attempt to clarify the grey areas of cannabis legalization in Canada, the Ontario Real Estate Association unveiled its plans to safeguard homeowners who have concerns about homegrown cannabis. Their plan is entitled:  “Protecting Ontario Homes: OREA’s Action Plan for Cannabis Legalization” and it urges Ontario lawmakers to:

The notion that former grow-op homes could be inspected and declared safe is of significant importance, as it allows realtors to sell homes more confidently, with any record of marijuana growth being stripped from the home’s title. It also allows potential buyers to have more confidence in former grow-op properties, especially if they have been inspected by formally trained officials.

Some officials have even suggested that these inspections are not necessary, with some comparing the growing of a small amount of marijuana to the growing of indoor flowers and houseplants. Nevertheless, real estate stakeholders are sure to tread carefully, at least for the next couple of years.

What can weed growers do to minimize damage to their homes?

Homeowners who wish to use their homes to legally grow marijuana should certainly take precautions to protect their home from damage, especially if they’re looking to sell in the future. The medical marijuana industry, which has been operating for well over 10 years in Canada now, has come up with numerous ingenious ways of minimizing building damage associated with weed growth.

Devices called “contained grow boxes” are known for their ability to grow cannabis plants without affecting a home, as they remove any physical contact between the marijuana plants and the home itself, greatly mitigating the chance of damage. Using the contained grow boxes, homeowners are able to control the smell and impact to their houses, making it much easier to grow their own weed in peace without complaints of smells from neighbors or structural damage from insurers.

The issues of homegrown weed are of such concern to the real estate industry that huge stakeholders are even putting their own money into solutions such as contained grow boxes, with James Zaza, president and CEO of Zaza Financial Group and Ontario Realtors Pension Plus, investing in smartphone-integrated contained grow boxes for homes.

Zaza claims that although a murder taking place in a home is the number 1 reason that buyers would be skeptical to buy, weed grow-ops are certainly the number 2 reason after that, plaguing properties with a certain stigma for many potential buyers. The “Grobo”, the contained grow box product which Zaza is backing, has been offered to real estate companies in Ontario, who can suggest that their clients use it. This helps to reduce worries and stigma regarding legal weed grow ops, as Zaza explains:

“If they’re ordering a Grobo – that takes care of the legal issue right there… they’ll get insurance, nothing can stand in their way, it can’t be objectionable to anybody.”

As pot legalization has come into place, numerous condo boards have been actively working to put new rules and bylaws into place as a response. As it stands currently, many condo complexes in the Toronto area are smoke-free zones, regardless of whether the smoke comes from tobacco, marijuana, or a mixture of the two. This means that marijuana cannot be smoked inside a condo or on a private balcony either.

If your condo building does not enforce smoke-free rules, then you may have to adhere to rules specific to your building which are designed to stop you from being a nuisance to others. Condo owners who do not smoke marijuana have the right to not be forced to smell it all day every day, and they are well within their rights to speak to the property manager if you are being a nuisance in this way.

If you smoke weed in your condo but you have a medical reason to do so, you may be asked to prove this with your property manager, along with proof that you cannot ingest the marijuana in a smoke-free manner. If this is the case, you may have to install specific ventilation in the condo to help maintain its condition.

Also, do bear in mind that many condo complexes are enforcing rules which prevent staff and concierges from accepting your marijuana deliveries, so be sure to keep an eye out for this if your property manager is making life difficult.

The bottom line is this – if you’re looking at moving into a new condo and you’re unsure about the rules regarding marijuana and smoking, ask your property manager what the rules are. It’s better the find out before you move in than halfway through your lease!

The legalization of recreational marijuana is an issue which much of the developed world is progressing on, as more and more nations around the globe decide that cannabis is not the dangerous drug that many have been led to believe, especially when compared to substances such as alcohol.

However, when it comes to its effects on Ontario real estate and home values, the effects are mostly yet to be seen. It’s likely that realtors, mortgage lenders, and home insurance providers are going to “play it safe” with regards to homes where marijuana is legally grown/smoked for now, although this cautiousness is likely to become laxer in the next few years. 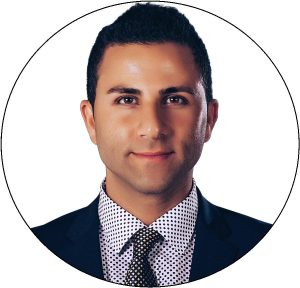 Ilan Joseph is a Real Estate Broker with Sutton Group and is co-founder of a 10-person award-winning Toronto, Thornhill and Vaughan real estate team. Since 2002, Ilan has been privileged to advise and service thousands of buyers and sellers, enabling them to reach their real estate goals.